Kynren is here. Epic is the word.

An epic tale of England

This summer, the North East sees the return of the amazing live action extravaganza, Kynren.

First launched by Eleven Arches in 2016, the epic tale of England was the talk of the region at the time and for many more after, and we’re delighted it’s returned to Bishop Auckland this year to bring excitement to your family’s summer.

As WorldHost Ambassadors of Bishop Auckland, we’re extremely proud to be supporting this world class event. We can’t contain our excitement to see the show, so here’s all you need to know about the action-packed performance, so you can get in on the excitement!

With an original script and soundtrack, special effects, video projections, fireworks and water geysers, your family won’t be able to take their eyes off the performance (and neither will we!). As the show takes you on a whistle stop tour of 2,000 years of historical events that shaped the North East, prepare to be wowed by fierce battles with mass choreography, all accompanied by movie-like surround sound.

The UK’s only open-air live show of its kind

Kynren is a one-of-a-kind show, taking place outdoors on a vast landscaped stage. With a lake at its centre and Auckland Castle as its back drop, it’s arguably an impressive set up. The 8,000-seat, open-air theatre will see the 90-minute show start at sunset and end in starlight. We’re getting goose-bumps just thinking about it! 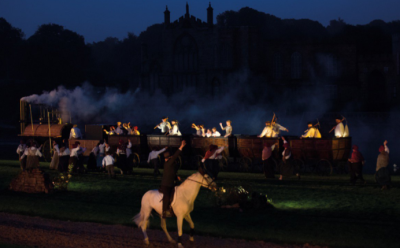 Not only does the show have a breath-taking setting, it also has an amazing cast to bring the performance to life. Directed by Olympic ceremonies veteran, Steve Boyd, Kynren is brought to the region by a 1,500-strong cast and crew of professionally trained volunteers. They will also be joined by a selection of horses, goats, sheep, oxen, geese and donkeys, to recreate the scenes with as much authenticity as possible.

Putting Bishop Auckland on the map

Eleven Arches, the charity behind Kynren, was the vision of Jonathan Ruffer. He founded the charity with the aim to establish Bishop Auckland as an international tourist destination, hoping to bring investment and empowerment to the community. So not only will the show be amazing to watch, we can go knowing we’re contributing to the promotion of the region- win-win!

Kynren is running from July to September, so if you want to grab a taste of North East history this summer, tickets are available now to purchase from the official site: https://elevenarches.org/

We’ll see you there!