We are thrilled to announce that we are now working with Reposit, a company that offers an alternative to the traditional tenancy deposit, and it’s proving very popular with our landlords and tenants.

The scheme, which provides landlords with more protection against rent arrears and damages, also allows tenants to save a substantial amount on their moving costs, but what are the other key benefits of Reposit?

The advantages of landlords opting to use Reposit:

The advantages of tenants opting to use Reposit: 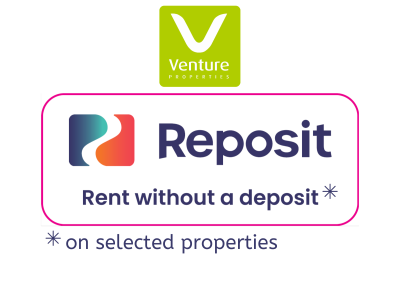 We have already received fantastic feedback from both tenants and landlords who have used the scheme.

Mrs C, who is one of our valued landlords, said: “I opted for Reposit as it was a no-brainer for me. I got more cover against potential future rent arrears and damages, and my new tenant reduced their move-in costs. It was a win-win for both of us.”

Mr R, a tenant who starting using Reposit recently, said: “This is the first time I’ve used Reposit, but it was straightforward and easy to use. Once my online application had been accepted, I was sent a link from Reposit to pay the amount directly to them and they then notified Venture. The amount I’ve saved on upfront costs helped me to pay for a removal van on the move-in day itself.”

For more information on our work with Reposit or to find out how the scheme can benefit you, get in touch with our team or Tweet us at @ventureprop.