The History of Our Darlington Office

Our Head Office sits on the corner of Duke Street and Larchfield Street, close to Darlington’s town centre. It’s a stunning Victorian building with a rich and varied history.

On 29th March, 1890, plans were submitted from James Harrison to build a four bedroom, three storey house on the south side of Duke Street, positioned on the corner of Larchfield Street. While the house isn’t listed on the 1891 census, it does appear on the 1901 census so we think it is likely it was built in 1892, making the building 130 years old this year.

The 1901 census shows the Howden family living here, with a 22-year-old Margaret unusually listed as head of the family. She lived here with several siblings and a servant, who presumably slept in one of the attic rooms where the original cast-iron fire place still stands today.

Lady Katherine Vane led a consortium who purchased the property from J.E. Hodgkin on 26th March 1914 for a grand sum of £600 - £150 cash with a mortgage of £450. The aim was to turn the large residential house into a home for unmarried, pregnant women who had nowhere else to go. This would become St Agnes Mother and Baby Home and was largely funded by the Anglican Church.

Getting back to St Agnes, in 1920, 48 girls had taken refuge here whereas by 1922 this figure had increased substantially to 85. While the home was in high demand, funding was difficult to come by given the reputation of these women at the time. Although where possible, the women did contribute to their stay. Between 1925 and 1928, about a fifth of all funding came from subscriptions from the women themselves who stayed here.

In 1931, due to the financial difficulties of the home – and let’s not forget the Wall Street Crash only two years earlier which had a devastating impact across the globe – St Agnes was forced to close for 10 months.

The good news is that after a public appeal for additional funds, as well as a realisation that the services of the home were sorely missed, St Agnes reopened its doors 10 months later and continued to go from strength-to-strength during the 1930s.

The setup was a small staff of probably two or three, with a Superintendent in charge who was a fully-trained nursing Sister. Below her was the Matron of the house who ran the operation on a day-to-day basis. To give you an idea of the work involved, in a single month in 1939 the Matron carried out 52 home visits (of prospective adopters), wrote 104 letters, attended 11 court hearings and welcomed 145 visitors to the home. She most certainly had her hands full and was paid an annual salary of £45 for her efforts.

During this period it is recorded there was room for 8 mothers and 3 babies at any one time in St Agnes.

The general way it worked back then was for the mother to be admitted 6 weeks prior to birth and then to stay with the child for 6 weeks afterwards. While not all babies were adopted, for those who were, the family adopting the child would be welcomed in and held in a waiting room – most probably our front office/reception area today. The baby would then be summoned for and handed over in the presence of the Matron. The birth mother and adoptive parents were never allowed to meet.

After the Second World War ended in 1945, attitudes began to slowly change with the introduction of the welfare state. In 1946 the home received gifts from as far afield as Rhodesia (a case of tinned peaches and marmalade) and Australia (six large tins of corned beef).

By the early 1960s, demand for the home was still increasing and requests were submitted to make the two attic rooms, previously used by domestic servants when it was still a private home, into bedrooms to accommodate more mothers. This was rejected by the authorities as the installation of a suitable fire escape was not feasible.

As the decade wore on, though, political and social changes would mark the beginning of the end for St Agnes. In 1961, the first ever contraceptive pill was made widely available in the UK and by 1967, abortion was legalised in England, Scotland and Wales. These two factors meant the demand for mother and baby homes was always destined to start declining. In July 1969, only 2 mothers were admitted into the home.

The 1970s saw the home change its use slightly in that it was not only used for unmarried mothers but also for shelter cases or even women who had relocated and needed refuge for a night or two before they could find alternative accommodation.

In 1972 a mother and baby were recovering at St Agnes. The child had a hare lip and cleft palate so had to be fed by teaspoon every hour during the day and night. An operation at the hospital was booked in but one morning the mother and child went for a walk and never returned. The same year a mother and baby were again recovering after birth at St Agnes when the mother went to get some fresh air, leaving the child with the staff. Tragically, she was never seen by staff again and never came back for her baby.

A young couple in 1973 were trying to hitch a ride from Scotch Corner roundabout back to Carlisle, where they lived. The lady was heavily pregnant so was picked up and brought to St Agnes. She stayed until the birth before presumably returning to Carlisle. Her husband stayed in another property in Duke Street during this time to be close by to his wife. This story made the Northern Echo, with the headline ‘The town that HAD room at the inn’.

The first time St Agnes closed, in 1931, was down to finances but this time it was simply a lack of need. Between 1972 and 1975 numbers reduced drastically. The final 1974-1975 report showed that over the last year St Agnes was open; just 29 women were taken in – 9 unmarried mothers and 20 shelter cases, while 3 staff members were still employed.

St Agnes closed its doors on 3rd November 1975. Committee Secretary, Evelyn Bailes, described it as a “sad occasion.” She continued, “It is bringing to an end a home that has been a real home for so many young women in distressed or lonely circumstances. It has been apparent for the last two or three years that the home has outlived its original purpose, which was to give shelter, and to care for unmarried mothers, and it is this lack of need, rather financial considerations, which has led to the decisions.”

While we have no certainty on what the conditions were like, there was an example referred to in the archives of a baby born here inviting staff to her wedding and one staff member was quoted as saying, “I have heard many girls say that St Agnes was the only real home they had known” while visitors commented on the “warmth and homeliness” of St Agnes.

That said, we have had mothers contact us who stayed at St Agnes who didn’t have fond memories of being here so it’s impossible to tell but we hope overall it had a positive impact on the community.

Since Venture moved to the building in 2008 we’ve had a number of visitors with connections to St Agnes, including children who spent their first weeks here. Believe it or not, we’ve had people from as far away as Canada come in and ask to take a look around. Of course, we were happy to show them a part of their history and for anyone wanting to visit in the future; you’ll be more than welcome.

The building’s history is a little hazy here. I’ve done my best to find out but haven’t had much success. I do know it was purchased by a real estate company based in Bishop Auckland who leased it out and have been told it was used as offices for Newcastle and Scottish Breweries (now owned by Heineken) at some point. When I emailed Heineken they advised they didn’t have records going back this far so couldn’t get any further information. We have been told about the brewery in the past though and the Yellow Pages from the 1980s show John Smiths had offices next door at number 47 so it may well be the case.

We do know for a substantial period of time before Venture took occupancy, the building was abandoned and left to ruin. What a great shame for such a beautiful building with such an interesting history.

The whole building was fully renovated in 2008, although initially we only occupied the ground floor before we grew the business in the years that followed. At the time of writing in 2022, we now occupy all three floors and employ 26 members of staff in this office alone.

To end the history of our office, does anyone fancy a ghost story? When the Directors have worked back late over the years, it’s probably natural to feel a bit spooky in here. It’s a massive building, it’s old and it’s a bit noisy. One of the Directors, he’s adamant, has heard footsteps and doors closing. While the rest of us have never taken this too seriously, things changed when one night about 8 years ago when we had a decorator freshening the office up for us. It was impossible for him to work during the day so he would come in through the night and leave before we started in the morning. One night, in the early hours, he was up his ladder on the first floor when he heard as clear as day a voice whisper in his ear the name “Beth.” Needless to say, he packed up his paintbrushes and rollers and scarpered rather sharpish.

If anyone with any connection to the building wants to get in touch with us, please email the Lettings Manager (and History geek), Matthew, at matthew@venturepropertiesuk.com.

If anyone with any connection to the building wants to get in touch with us, please email the Lettings Manager (and History geek), Matthew, at matthew@venturepropertiesuk.com.

Please note, the black and white photograph below is credited to the Northern Echo. The photograph was included in an article published in 1975 relating to the closure of St Agnes. 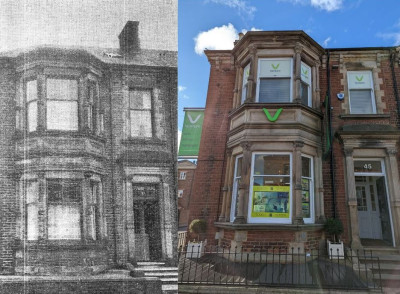