I’m sure we can all agree the Queen’s Platinum Jubliee celebrations last weekend gave our country a much-needed boost. After Brexit, Covid, the war in Ukraine and now a cost of living crisis not experienced since the 1970s, we all deserved a few days off and something to take our minds off what has been, let’s face it, not the best couple of years.

When you watch the coronation back, it’s hard to imagine the pressure the then 25-year-old Princess must have felt. With the whole world watching on (the coronation itself was televised and beamed to audiences across the globe), Her Majesty carried herself with grace and dignity, something she has maintained throughout her life in the service of our country.

As a County Durham estate agent, we have looked into some of the Queen’s visits to the county and her family connections here.

Just two years after her coronation, the Queen visited Chester-le-Street in 1954 as well as both Newcastle and Sunderland.

In 1960, she returned to the North East to inspect the new towns of Newton Aycliffe and Peterlee, before flying home from RAF Middleton St George (today’s Teesside Airport). Famously (if you’re from Newton Aycliffe) she popped into a house on Barrington Road for a cuppa and a slice of cake!

Darlington saw two royal visits – in 1967 and 2002. Lynn, from our Darlington office, remembers lifting her children up above a barrier in the market place so they could both catch a glimpse. The latter trip saw Her Majesty also visit Durham city, as well as other locations in the area.

Now some of you keen fans of the royal family, will know the Queen does have some family ties in County Durham. In fact, her mother’s ancestors, the Bowes-Lyons, helped build some of the most famous landmarks in the North East, including Bowes Museum in Barnard Castle. The Queen Mother used to holiday at the nearby Streatlam estate as a child and carried a fondness of the area throughout her life, visiting numerous times.

At Venture Properties, we were keen to celebrate this never-seen-before occasion with office parties of our own. Staff from all of our branches – Darlington, Chester-le-Street, Crook and Durham – got the bunting and decorations out, ordered some very questionable face masks off the internet and tucked into far too many calories. If you can’t have a slice of cake and a scone for a Platinum Jubilee, when can you? 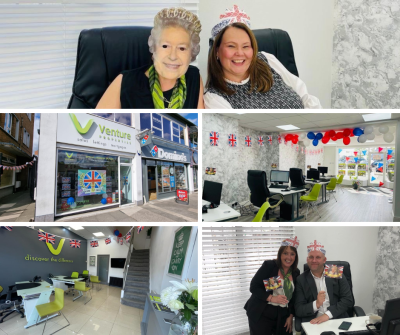